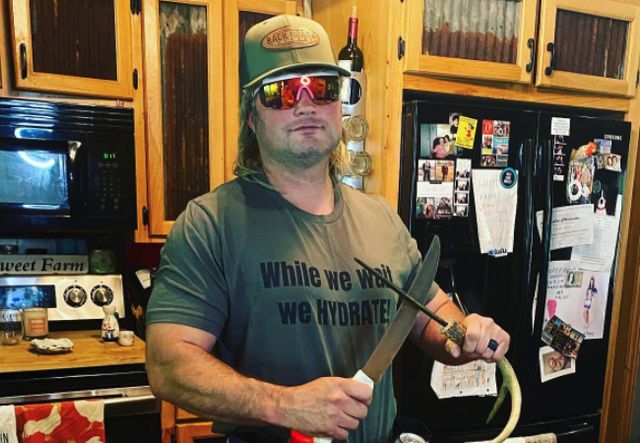 He is best known by his social media name, Stalekracker, a social media personality, cookbook author, and YouTuber.

He went trending on social media after Gordon Ramsey reacted to one of his TikTok videos.

Continue reading the article to find out what exactly was in that video!

He hails from Louisiana, United States of America.

Millions know him as Stalekracker, but his real name is Justin Chiasson.

It looks like the 40-year-old prefers keeping his identity concealed, but unfortunately, through sources, his real name became public.

In this era where social media works to spread the news at the speed of light, everything is just a click away and impossible to hide.

Similarly, Justin keeps his private life away from the limelight. Neither has he shared any information on his family nor about their whereabouts.

Who Is Stalekracker Married To?

The social media personality has garnered fame and limelight in a short fan solely for his exceptional culinary skills and entertainment.

With the rise in prominence, people started digging in more towards his personal life, more specifically about his better half.

For anyone who does not know, Stalekracker is married to Amy Chiasson.

Today, Amy Chiasson is 37 years old and describes herself as a wife, mother, and animal lover.

Justin and Amy have been married for over two decades now, and the couple has a daughter together too.

However, Justin refrains from mentioning his wife publicly and doesn’t reveal much about his marriage in general too.

There is this one time, on her birthday, that the 40-year-old chef shared a picture with a sweet message, wishing his wife all good things. Take a look!

Glad to know that the couple is happy together.

Furthermore, from their union, the couple shares two children.

Their eldest daughter, Karlee Chiasson, who is currently 17 years old, and their younger son Hoyt, is 14 years old.

The siblings share a great bond. In fact, his sister never shies away from adoring her little brother and posting about him on her social media.

Similarly, another person who is seen regularly on Karlee’s feed is her dad.

The father-daughter duo is always up to an adventure and flaunts their great times together.

Nevertheless, we wish to see the complete family-making cameo on Stalekracker’s Tiktok or YouTube someday, don’t we?

Does Stalekracker Wear A Wig?

The social media personality is seen in his printed cap and short blonde hair at all times, which looks like a wig to the viewers.

He is yet to disclose whether that is a wig or just his normal hair.

Additionally, in all his videos, each one of them, the 40-year-old is seen flaunting the very same cap.

Either he has an old love for that cap of his, or he wears a joint wig underneath, as the latter is what seems to be the case.

Stalekracker’s Net Worth Now In 2022

Justin, aka Stalekracker, rose to fame once he was discovered by viewers for his hilarious yet informative cooking video.

Not long after posting his first video in 2020 on Tik Tok, his prominence skyrocketed, earning him millions of likes and followers.

He gained massive fame when the celebrity chef Gordan Ramsay reacted to his video of cooking a steak while using a giant knife, an entire stick of butter, and seasonings.

To say less, millions watched this critic video by Ramsay and loved it.

Furthermore, Stalekracker has a cookbook named ‘Da Cajun Two stop,’ which is co-authored with his wife.

Similarly, Justin also has a YouTube channel where he shares the same culinary videos as he does on Tik Tok.

Stalekracker is 40 years old today. He was born on November 12, 1981, Louisiana, United States of America.

Stalekracker is married to Amy Chiasson, a 37 years old beautiful woman. The couple live in Louisiana.