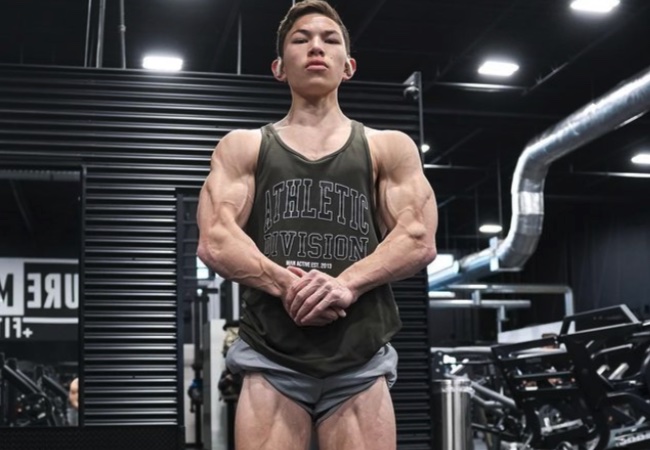 Tristyn Lee is a Canadian bodybuilder, fitness athlete, and internet personality who stepped into fitness right from the age of 15.

When not hitting the gym, he often could be found on a soccer pitch as he aspires to be a renowned soccer player.

Tristyn hasn’t talked much about his parents, which makes the information about them very limited.

The 19-year-old grew up under the guidance of his two elder siblings, Tyler and Braedon Lee.

Both Tyler and Braedon are fitness enthusiasts and experts, which Tristyn followed as well from a very young age of 15.

Who is Tristyn Lee Dating?

Tristyn Lee is a motivated teen putting his best efforts to achieve what he yearns for.

The 19-year-old seems to be entirely focused on bodybuilding and fitness, which is evident in his physique.

Besides, there haven’t been any rumors of any sort of his affairs or link-ups.

So, it is safe to say, Tristyn is single at present.

One place where we can get news or information about someone’s details is their social media, but Tristyn has filled his feed with workout videos only.

Nevertheless, we love seeing what he posts but would love it even more if we could get a glance of his better half once he gets in a romantic relationship.

The 19-year-old takes his workouts and diets very seriously.

And we bet anything that he does because that shredded and toned body doesn’t come that easy.

He was only 5 when he discovered a passion for bodybuilding and later traveled across Europe to train with pro trainers and coaches.

He weighs around 57 kgs right now.

Similarly, at first glance, people notice that Lee isn’t that tall in height.

However, since Lee is still a teenager, there’s still soon for him to grow and make drastic changes.

He maintains an amazing physique, and to maintain those gains; he hits the gym every day with excuses.

Besides, he trains twice a day and follows a balanced diet.

He takes five meals a day that includes: breakfast, snack, lunch, snacks, and dinner, which includes a minimal amount of carbs, low-fat food, and lots of proteins.

His diet includes following a strict keto diet with a macro percentage of carbs, proteins, and fats.

The most important part of his bodybuilding journey is supplements and protein powders that help with gains.

Back in 2017, there were controversial questions regarding his use of steroids for bodybuilding.

While many suspected he did, Tristyn came clean, and for the proof, he showed doctors documentation as proof stating no traces of steroids in his system.

That rubbished all the allegations against him.

The 19-year-old, along with his elder brother, started an online business selling supplements called Chimera Nutrition, and they ship their products in Canada and USA as well.

What Is Tristyn Lee’s Net Worth?

Tristyn is a fitness athlete and a social media personality who gained prominence at a young age.

About his income, he has a good income from his business of supplements.

Similarly, he earns from sponsorships and partnerships with brands.

As of today, Tristyn Lee is not dating anyone publicly.

Tristyn Lee maintains a weight of 57 kg or 125lbs most of the time.