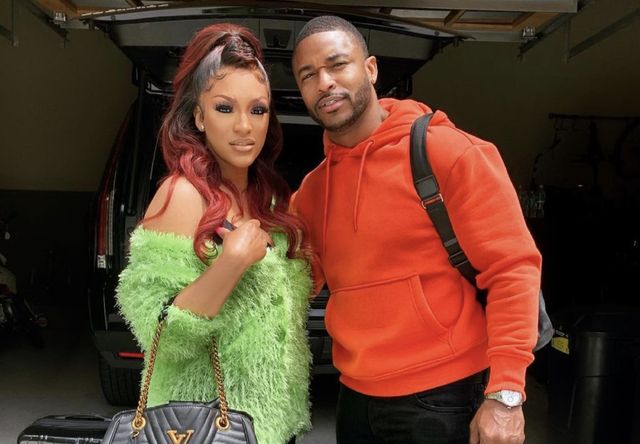 Drew Sidora is an actress noted for her recurring role of ‘Chantel’ in the Disney Channel series ‘That’s So Raven.’

However, her stint in the reality series ‘Real Housewives of Atlanta’ turned more heads. To know why to give this article a quick read.

What is Drew Sidora’s Age, Background

Drew was born to Dr. Robert Jordan and Rev. Jeanette Jordan, who are American natives.

Sidora also has four siblings. She has one brother named Bryan and three sisters named Allison, Christa, and Edilah.

Unfortunately, Drew’s father has Dementia/Alzheimer’s, which has greatly affected his ability to remember certain aspects.

For the most part, Jeanette, Drew’s mother, helps him get through every day.

Before being married to her now-husband Ralph, she was in a committed relationship with record executive Ricky Brascom.

The two even got engaged and started a family of their own. The pair share a son named Josiah.

However, things went downhill; it almost turned into a nightmare for the actress while she was pregnant with Josiah.

While she was brewing thoughts about marriage, Ricky abruptly called off the engagement and disowned his soon-to-be-born son.

Drew, on the other hand, felt shattered.

Eventually, she gathered to courage to move on and single-handedly take care of her son.

Later, news broke out of Ricky’s arrest for smuggling $4 million worth of cocaine in a private jet.

Drew’s now-husband Ralph filled the gap of a father figure in Josiah’s life after he officially adopted Josiah after marrying her.

In an interview, Drew said,

“Josiah’s biological father was in prison when Ralph and I met, and Ralph took my heart because he loved my son.”

Needless to say, Drew found her way to pure love.

Who Is Drew Sidora Married To Now?

Drew is a married woman who enjoys a blissful married life with her husband, Ralph Pittman.

Ralph is a composer, founder, and CEO of Wellness Company, best known for producing therapeutic music called My Mind Music.

Besides, he is also a business strategist at Gartner, a research firm since 2016.

The duo first met in 2013 in Los Angeles while she was there for her movie Crazy sexy Cools’ promotion.

She saw him while at a hotel and took notice of him.

It kind of turned into a filmy scene afterward.

Her then two years old son lost his ball while playing, and Ralph offered help to find it. He said,

“Let me help this woman. She needs my help.”

With that said, Ralph ran and got the football and said,

“Aw, little man. You got a football? I played football. Let’s play football.”

The pair then exchanged numbers, but the romance only started much later when the actress visited LA for work purposes.

They went on a date that lasted for about 12 hours.

Drew then thought of him as the “man of her dreams” and described him as a “knight in shining armor.”

Ralph popped her that big question on a rooftop decorated with torches and rose petals three months later.

The pair got engaged in June 2014. After only two months from their engagement, the pair had a small beach wedding.

As of today, Ralph and Drew have been married for eight years now.

Drew and Ralph have two children together. One son named Machai born in 2015 and one daughter named Aniya, born in 2018.

As mentioned, he adopted Josiah after their marriage.

However, things became a little confusing after Josiah’s biological father managed to bail his way out of prison and wanted to rebuild a relationship with him after all these years.

Drew was skeptical about this and even said,

“Ralph is the only dad Josiah has ever known.”

After a lot of family discussions, Sidora lets her ex-fiancé have the father-son time with Josiah even though she isn’t very positive about it.

How Is Drew Sidora’s Married Life?

The actress joined the cast as a newbie in the series, The ‘Real Housewives of Atlanta’ in December 2020.

On the show, Sidora remains pretty verbal about her personal life.

Fans also noticed what looked like a fairytale marriage was instead going through a storm.

In fact, she mentioned it herself during one of the episodes about trying marital counseling.

The reason for marriage counseling was that her husband, Ralph comes off as disinterested and disingenuous.

The viewers were slamming Pittman for being manipulative and insensitive towards his wife and their marriage.

In another instance, Drew said how Ralph tries to be controlling of her and their marriage.

This sometimes gets the couple into arguments. But that does not necessarily mean there’s no love.

“I really feel like when we’re getting along; it’s forever. But when we have these arguments, it’s like, enough is enough at a certain point. We’ve got to get our act together for the sake of our kids and for our marriage if we want this thing to last.”

Since the couple is still together, we think things are going great between them.

Drew started her career at the tender of age from the movie, Divas followed by numerous other opportunities and prominent roles.

When her mother and sister realized her talent for entertaining people, they got her into acting classes.

By the age of eight, she bagged her first role.

As an actress and a singer who has been part of several songs and has been featured in Sean Paul’s music video ‘Giving It Up To Me.’

Some of her prominent work includes drama TV series ‘The Game,’ ‘Crazy sexy Cool,’ and many more.

From her Endeavour’s she has garnered an estimated net worth of $1.5 million to date.

Drew Sidora is 36 years old today. She was born on May 1st, 1985, in Chicago, Illinois to Dr. Robert Jordan and Rev. Jeanette Jordan.

Drew Sidora was previously engaged to get married to Ricky Brascom. However, the couple called off their engagement after Drew became pregnant.

Drew Sidora and Ralph Pittman got engaged in June 2014 and married two months later. The couple have been married for nearly a decade now.

Drew Sidora has three children. One son Josiah with her former partner Ricky Brascom. She also has two children with her current husband Ralph Pittman. One son named Machai and one daughter named Aniya.