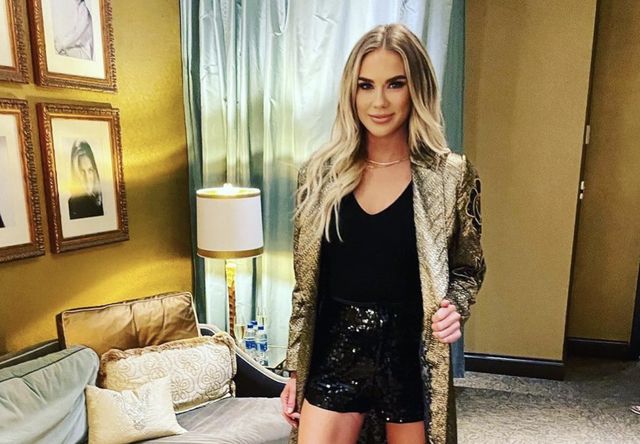 Rachel Bradshaw is an American singer and a songwriter who rose to prominence when she sang the national anthem at the opening of a Seattle Seahawk’s Cowboy game.

Besides, she is most recognized as the daughter of a former football player, Terry Bradshaw.

She was born and brought up in Dallas, Texas.

Rachel is the eldest daughter of parents Terry Bradshaw and Charlotte Hopkins.

Terry and Charlotte, who married each other in 1983, separated and divorced in 1999.

Rachel has a younger sibling named Erin and a step-sister Lacey Hester.

She went on and enrolled at Belmont University, located in Nashville. At Belmont, Rachel studied music and later graduated with a degree.

Like mentioned, Rachel’s parents parted ways years back. But marriage with Charlotte wasn’t the only one for Rachel’s father, Terry.

Terry, a retired professional American football player, previously served as a quarterback for the Pittsburg Steelers in the NFL.

He has been married thrice and now for the fourth time with his beloved wife, Tammy Bradshaw, since 2014.

All three of Terry’s past marriages ended in divorce. Similarly, he doesn’t share kids with anyone except his 3rd wife, Charlotte.

As mentioned, Rachel has one biological sister named Erin and a step-sister named Lacey Hester.

Erin is an avid horse lover and a world champion Equestrian. She has been happily married to her husband Scott since 2017.

Likewise, Lacey is Rachel’s step-sister. She is Tammy’s daughter from her previous relationship with David Luttrull.

They aren’t sisters by blood, but both have an affectionate bond.

The Bradshaw family have their own show called ‘The Bradshaw Bunch,’ which premiered back in 2020 and is currently in its second season.

Here, viewers get a glimpse of their day-to-day activities and an impression of their lifestyles.

Rachel was married to American football placekicker Rob Bironas. He was the kicker for Tennessee Titans.

Unfortunately, the marriage was short-lived.

No! There was neither divorce nor a split. Their marriage had a tragic end after Rob lost his life in a fatal car accident a few months later on September 20, 2014.

After an autopsy, authorities revealed Rob was driving under the influence of alcohol.

Also, he had traces of Valium were found in his body.

Later, in an interview, Rachel revealed that Rob was sober while at home.

Rob greeted his wife goodnight and headed towards his room; afterward, he was nowhere to be seen when she went in to find him.

This created panic, and she ended up calling 911. Rachel, herself, remains unaware of what went wrong that night with her husband.

Moreover, Rob’s death devastated her. It took her a long time to get back to her usual life.

Additionally, to immortalize their short yet memorable marriage, she inked Warrior in her wrist, mentioning that her late husband was and will be a warrior always.

To pay tribute to Rob, she converted her wedding ring into a neckpiece to keep him spiritually near her.

Moreover, to divert her attention from her loss, Rachel turned towards Real Estate, became a realtor, and has been working as a realtor since.

Rachel was fortunate enough to find love another time. She began dating Dustin Hughes, Director and writer credited for movies like; ‘Do Something.’

While Rachel was head over heels for Dustin, her father doubted his intentions.

The 34-years-old singer initially had second thoughts about her rushed relationship.

However, she was convinced that they were meant to be together.

But things did not go as hoped, and the couple ended up announcing their split rather than a wedding date.

While there’s no clear reason why they split, one thing is for sure. The whole Bradshaw family’s dislike played a huge part.

Moreover, Dustin reportedly cheated on Rachel with another woman and was expecting a baby with her too.

Moving on, in 2020, Rachel developed a soft corner for ‘The Bachelorette’ show fame Conner Saeli.

“I really like Connor. He’s just a good guy. And we’re just comfortable. I feel like sometimes it’s taken me months to just get comfortable with somebody. So, it’s nice that someone brings that out on the first physical date.”

However, nothing significant came out of the couple’s talking and video chatting every day.

Who Is Rachel Bradshaw Dating Now?

After her failed series of relationships, Rachel shyly admits to having a special someone in her life yet again.

Sadly, the question, who? remains a mystery.

The singer spilled some beans about her mystery man during an interview with E! News.

Rachel is happily in a new relationship.

“I’m not single anymore. But while we were filming, I was very single—and working. We worked every day for months, so I just got to know myself really well.”

She is yet to reveal her new mystery boo, but.

Besides, we hope the budding romance between the two doesn’t frizzle like the ones earlier.

Rachel is actively working as a realtor. Besides, she has a stable career as a singer and a songwriter.

Rachel earns a decent amount from her work as a realtor, singing career, and reality show.

As of 2022, Rachel has accumulated a massive net worth of $5 million.

Rachel Bradshaw was born to Terry Bradshaw and Charlotte Hopkins.

Rachel Bradshaw is dating a mystery man in 2022. She was previously dating Dustin Hughes.