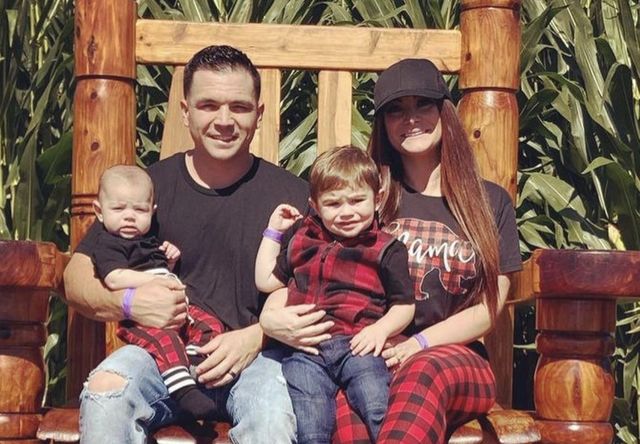 Christopher is the jack of all trades, as fans notice he possess a lot of skills during the show.

As per sources, his father’s name is James Buckner, who worked at the NYC department of sanitation.

Likewise, he grew up with two other brothers who remain out of the spotlight.

Many know Christopher because of his famous partner Deena Nicole Cortese.

Christopher and Deena met each other back in the early 2010s through a mutual friend.

The couple reportedly exchanged numbers and added each other on Facebook too.

Since then, a shared attraction pulled Deena and Christopher closer together, and eventually, they began dating.

After a couple of years of relationship, Christopher proposed to Deena in November 2016.

The couple took a romantic getaway to Mexico, and there Christopher proposed to Deena and asked her to marry him.

The couple chose a very beautiful where their union took place.

Christopher and Deena agreed on a New Jersey-based winery called Laurita Winery as their wedding venue.

The winery gave Christopher and Deena the perfect combination of luxury and serenity.

Their friends and family who attended the ceremony greatly enjoyed the whole affair.

A year later of their marriage, the couple announced their first pregnancy. They welcomed their first child, a son Christopher John Bucker (CJ).

In May 2021, there was a new addition to the family. Yes! The couple was blessed with another baby boy Cameron Theo Bucker.

“The Buckners are now officially a party of 4 ❤️.”

Who Is Wife Deena Nicole Cortese?

Deena is a household name in the American TV world.

She is a famous TV personality who rose to prominence after starring in the reality MTV TV series Jersey Shore.

While she was seen single in most of the seasons, she later meets her now-husband.

Deena being a fan favorite her every little thing was noticed by the fans.

So, there was no way she would miss out on introducing her sweet boyfriend in the show.

However, he only appeared on season 5 during the season’s final.

Fans took a brief interest in him. He made an appearance quite often after that.

His entry as Deena’s boyfriend helped him have an identity of his own on the show.

Likewise, the duo also appeared on Couple therapy together in 2014.

Furthermore, Deena has made a prominent spot for herself in television.

She has appeared in TV shows like the ‘Playboy Morning Show,’ ‘Nail Filers,’ ‘Snooki & JWOWW,’ and many more.

Christopher has a successful career of his own besides his frequent appearance in the series alongside his wife.

He works in publishing at professional sports publications, a publisher of Souvenir Magazines.

Furthermore, he works in construction as well. He previously worked for Hallen Construction.

For the time being, Christopher has kept his net Worth a secret.

On the other hand, his wife has no plans of hiding the extravagant numbers that make up her bank account.

As mentioned earlier, Deena and Christopher currently live in a beautiful mansion that’s fitted with a jacuzzi, pool, and a gym as well.

With a massive $2 million net worth, Deena makes such large purchases look like minor stuff.

Christopher Buckner is 5 feet 8 inches tall in height and usually maintains a weight that’s around 85kg to 90kg.

Christopher Buckner is married to Deena Nicole Cortese. The couple met in 2011 and married on October 28, 2017.